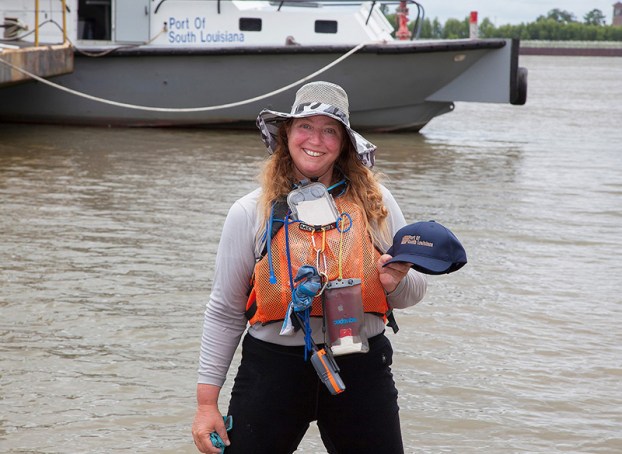 Traci Lynn Martin traveled through St. James, St. John the Baptist and St. Charles parishes near the end of her record-setting journey along the Mississippi River. She stopped briefly in Reserve on July 8 and stopped for the evening a few hours later in Norco. (Photo courtesy of the Port of South Louisiana)

RESERVE — Traci Lynn Martin briefly stopped by the Port of South Louisiana in Reserve last week on day 52 of her Guinness world-record setting 55-day expedition down the Mississippi River.

More than 5,000 people cheered her on and tracked her progress in the public Facebook group, JustAroundThePointe. Many referred to her as the “Mississippi Mermaid” and shared how proud they were of her achievement.

Martin’s journey was one of hope and inspiration. She has battled rheumatoid arthritis since 2010 and was recently diagnosed with scleroderma, another autoimmune disease. With a mission to show those living with chronic health problems that the sky is the limit, she persevered through every ache and pain along the way. The voyage was more difficult that she imagined, but it never stopped her from turning her dreams into a reality.

Martin is no stranger to endurance-focused expeditions. She previously attempted to become the first person to circumnavigate the five Great Lakes in less than one year. During “The Far Blue” expedition, she raised proceeds and awareness for AIDS.

She became the first person to circumnavigate the three largest great lakes in less than one year in October 2017. However, she had to end her expedition at 3,592 miles in December 2017 due to ice forming on Lake Ontario. She was less than 250 miles short of the world record.

Martin was overcome with tears of happiness after she broke the Guinness world record at mile marker zero of the Mississippi River on July 11. She thanked trusted logistics team member Marv Kuziel and everyone who has cheered her on or given her a place to stay along the way.

Martin will now head home to Missouri to meet her new granddaughter.

For more information on Martin’s journey, visit justaroundthepointe.com or www.facebook.com/groups/453369874831383/.