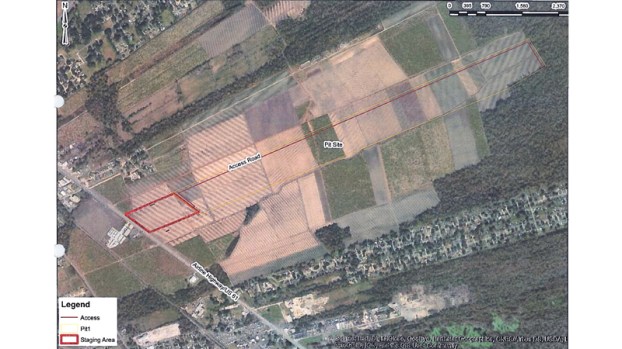 This map shows the LaPlace land that is encompassed in a proposed zoning change from single-family residential to rural. The area is currently in use as a sugar cane farm.

LAPLACE — More than 150 LaPlace residents composed letters voicing their dissent to a proposed rezoning that would change a 162-acre lot near the River Forest subdivision from single-family residential to rural.

The St. John Parish Planning Commission voted 6-2 to recommend denial of rezoning during Monday’s meeting. The proposed rezoning must now go to the St. John the Baptist Parish Council for a final vote.

Planning and Zoning Director Rene’ Pastorek said the rezoning application was submitted with the intention to set up permitting for operation of a dirt pit. The goal would be to become part of a federally approved list of locations that the U.S. Army Corps of Engineers could solicit for the procurement of dirt materials in the West Shore Levee construction.

“This is the first step to receiving approval to operate a dirt pit. The zoning has to be rural,” Pastorek said. “There has to be additional regulations such as a coastal use permit issued by the parish, submittal of a storm water management plan and approval of the dirt pit as a conditional use by the Parish Council. Approval by the parish is not approval for use of the dirt. That’s really up to the Corps, depending on if they need it or not.”

LaPlace resident Dr. Christy Montegut submitted the application in June. It involves lot C of Elvina Plantation, a 162-acre AREA on Airline Highway between River Forest and Highway 51. The area is currently in use for sugar cane farming and includes storage barns for equipment.

The application states the proposed use of the property is a borrow pit for clay extraction for the West Shore Levee Project. Montegut stated the impact on the surrounding area would involve creation of retention ponds to assist drainage of Old Highway 51 and the River Forest subdivision.

However, River Forest residents feared industrial activity resulting from a change to rural zoning could have negative impacts on the environment and local property values.

Fliers were handed out near the front of the subdivision to raise awareness of the proposed rezoning. River Forest Homeowner’s Association president Dwayne Templet penned a letter of opposition that was distributed to all in attendance at Monday’s Planning Commission meeting.

Planning Commission member Georgia Keller cast one of the votes of denial based on the opposition she saw from the residents.

“I feel that residents of River Forest were not well informed. I think it would have a great impact on them as far as their property and the unknowns and uncertainty of the clay pit,” Keller said. “Some of the residents said no one gave them information or input on the dirt pit. There was nothing to let them know what’s going on.”

St. John the Baptist Parish President Jaclyn Hotard recently reported that the U.S. Army Corps of Engineers is in the process of procuring commercial borrow pits. Although half of the clay for the project is expected to come from the Bonnet Carre’ Spillway, the rest will likely come from sources in the tri-parish area.

She said the application process will be closed in early November.

The levee project, which will stretch for 18.5 miles through the three parishes, will also require trucks hauling the dirt from the spillway and local sources to the project site, which could be another potential source of revenue for local operators.

According to the Corps website, the West Shore Levee will also include one mile of T-wall, four pumping stations, two drainage structures and approximately 35 utility relocations. The project will also provide localized risk reduction measures focused in St. James Parish.

L’OBSERVATEUR will provide an update on the proposed LaPlace rezoning when the decision goes before the Parish Council.