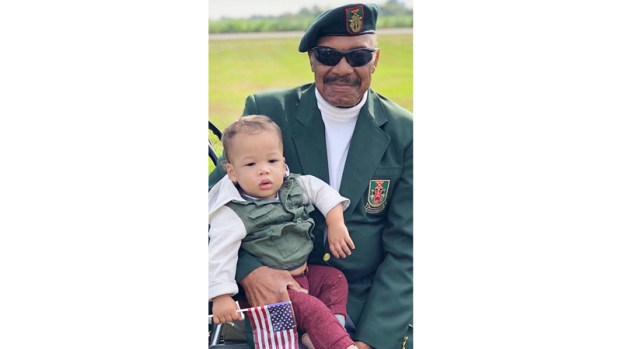 Al Cutno of LaPlace had a 24-year career in the U.S. Army that included 18 years in Special Forces. He is pictured with his grandson, Kai.

LAPLACE — Al Cutno of LaPlace fears nothing because he has survived the worst.

Cutno’s 24-year career in the U.S. Army included 18 years in the Special Forces, a group colloquially known as the Green Berets for their unique headgear. It was a brotherhood bound by the close ties that come from enduring life-changing experiences.

Cutno spent a part of each year from 1963 to 1968 in Vietnam and survived the wrath of the Tet Offensive. He remembers looking through the barbed wire that separated his military camp from the surrounding villages and seeing people on the move, escaping from an impending attack.

For three weeks, Cutno’s camp was surrounded as the enemy attacked every major city in South Vietnam.

The American troops at the camp had only a handful of M16 guns. Firearms from World War II were brought over with ammunition but without magazines, putting the Americans at a severe disadvantage for combat.

As the body count across Vietnam skyrocketed into the thousands, President Lyndon B. Johnson went on air and said a prayer for the families who had lost loved ones.

Even though there was not a church or a pastor in sight, the experience pulled Cutno closer to his faith.

“They could have walked over us any time if they wanted to,” Cutno said. “I’m here today because God wanted me here. There was no way we should have walked away from that.”

There were other instances when Cutno was pinned into a life or death situation. While working in communications, he was responsible for operating a small generator in a mountainous region. Every time he would crank up the generator, he would come under fire from enemies hidden in the distance.

He remembers getting word of President John F. Kennedy’s assassination through a printed communication from United Press International. The men in his unit asked him how he could type such a thing, refusing to believe it was true until they saw it with their own eyes on a news broadcast.

“There were grown men standing there, crying, because he meant so much to us,” Cutno said.

The Green Berets were the brainchild of President Kennedy. For Cutno, Special Forces was a niche he fit into when he felt there was no other place in the Army that he belonged. The brotherhood was so tight that Cutno could walk into the general’s office without identifying himself and strike up a casual conversation.

“That’s how close we were in Special Forces,” Cutno said. “When you build relationships like that, it lasts forever.”

To this day, he participates in an annual Mardi Gras parade with his fellow Green Berets.

Cutno moved to LaPlace in 1988 and has served the community ever since. As a member of VFW Post 3337, he participates in the Monday night bingo program to raise money and fund projects benefitting local veterans.

Through the American Legion Post 383 in LaPlace, Cutno has helped provide food and other resources to those in need.

Cutno is most moved by the flag ceremonies at funerals, when American Legion Commander Allan Reynaud reads a poem that brings people to tears.

Outside of his community service, Cutno enjoys maintaining a variety of fruit trees on his property. He tends to a year-round vegetable garden for his wife, Chung Cutno, who operates Chung’s Heavenly Sweets on Belle Terre Boulevard in LaPlace.

Chung’s has allowed the Cutno family to further service the community, as it provided overnight shelter to neighbors with nowhere to go in the wake of flooding from Hurricane Isaac.

Faith remains an important part of Cutno’s life. He is most active in his Gideon International Group, which places serviceable Bibles in hotels, jails, nursing homes, restaurants, schools and other points around the River Region. Other Bibles funded through Gideon International are sent to more than 200 countries around the world and printed in 90 different languages.

Cutno also serves as a deacon at First Baptist Church in LaPlace. This past Sunday, he returned to church for the first time since the Stay at Home order was instated. With social distancing measures in place, he was able to recognize five graduating seniors and let them know Gideon International will distribute Bibles in their honor.

Connecting with the youth is one of Cutno’s passions. In the past, he would speak to the boys and girls at John L. Ory through the Louisiana Ambassadors organization. During the visits, he aimed to set them on the right path by sharing his high school diploma.
“My diploma says ‘state-approved negro high school,’” Cutno said. “The kids couldn’t believe it; They had never heard of a negro high school. I told them, this is where I came from. It doesn’t matter where you come from. Don’t let that determine where you’re going to go in life.”