LAPLACE – Corrie Wallace, 37, of LaPlace turned himself into authorities around 10 a.m. Monday morning in connection to a ‘vicious’ homicide that occurred early Sunday morning in LaPlace, according to Sheriff Mike Tregre. 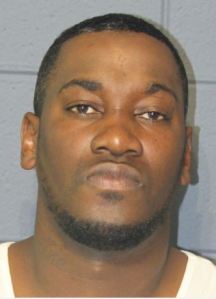 Ja’Riel Sam, 25, of LaPlace was found deceased in a vacant lot with a gunshot wound to her forehead.

This is not the first time Wallace has been arrested, according to police. Wallace was being questioned Monday afternoon as Tregre held a press conference outside of the Percy Hebert building in LaPlace.

He is expected to be booked on a first degree murder charge, along with a kidnapping charge and other charges that may arise pending investigation.

At about 3:30 a.m. Sunday, deputies responded to the 400 block of Belle Terre Boulevard in LaPlace for the report of a hit-and-run after a vehicle crashed into the guardrail near the Ford dealership. By 3 p.m. Sunday, investigators with the St. John Sheriff’s Office developed Wallace as a suspect, had a warrant out for his arrest, and had recovered what is believed to be the murder weapon from a nearby canal.

Upon arriving on scene early Sunday morning, police discovered the crashed vehicle was empty and began a canvass of the area. Less than 1/10 of a mile down Belle Terre Boulevard, going toward Airline Highway, officers discovered a deceased female identified as Ja’Riel Sam. An autopsy was performed, and the cause of death was determined to be a gunshot wound to the head.

After identifying the victim, officers made entry to her apartment just off of Linda Lane in LaPlace. Once inside, police discovered Sam’s 4-year-old son sitting on the bed, unharmed but traumatized.

“Someone had entered the apartment and poured large amounts of bleach and other cleaners all over the apartment,” Tregre said. “It was an attempt to destroy evidence at this crime scene.”

At that time, officers turned to crime camera video, as well as neighborhood video from nearby businesses and residences. From the video, Wallace was developed as a suspect. Footage revealed that a subject identified as Wallace entered Sam’s apartment.

“We did not find (signs of) forced entry, but something went very wrong inside of her apartment,” Tregre said.

One crime camera caught footage of Sam “trying to escape her own apartment” as someone tried to pull her back in, according to Tregre. At some point in time, the subject identified as Wallace pulled her out of the apartment and stuffed her into the trunk of her vehicle.

Officers believe Sam was alive at this point in time. After placing Sam in the trunk, the perpetrator drove from Linda Lane to Belle Terre Boulevard. At that point, police believe Sam found a way to escape the trunk and exit the moving vehicle. Wallace also allegedly jumped out of the moving vehicle, causing it to crash into the guardrail.

Divers with the St. John Sheriff’s Office searched a canal where Belle Terre meets Fairway Drive and located what they believe to be the murder weapon.

“Corrie Wallace jumped out of that moving car and attempted to catch her, which he did. We believe he shot and killed her right there on Belle Terre Boulevard,” Tregre said.

Wallace saw himself on television and called St. John Parish authorities Saturday night, telling them they did not have to put him on TV because he was going to turn himself in. He called police again Monday morning and turned himself in just after 10 a.m.

No other suspects have been developed.

The connection between Wallace and Sam is unclear at this point in the investigation. Police have found Wallace is affiliated with people who reside within 100 steps of Sam’s apartment. Tregre said Wallace is originally from New Orleans but stays in LaPlace from time to time.

Sam’s 4-year-old son is with family members, and Tregre said he is proud of the little boy for assisting police in their investigation.

“I want to commend my officers for working nonstop in the midst of this pandemic,” Tregre said. “It’s truly sad that someone would do something this vicious to this young lady.”

Anyone with further information on this homicide is asked to call the St. John the Baptist Parish Sheriff’s Office TIPS line at 985-359-TIPS, SJSO dispatch at 985-652-6338 or the Criminal Investigations Division at 504-359-8769. Citizens can also submit tips on the Sheriff’s Office website at http://stjohnsheriff.irg/submitatip.php.