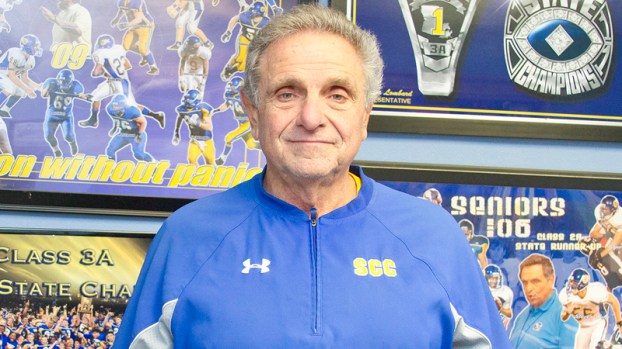 Coach Frank Monica teaches athletes that to respond to adversity with teamwork and sacrifice.

A world without sports is a different world entirely, according to Monica. While the future of the baseball and softball playoffs remains uncertain, Monica is sure of one thing.

“Tough times don’t last, but tough people do,” Monica said. “That’s something we’ve always preached to our athletes. Athletics have taught us teamwork and sacrifice. We’ve learned not to be selfish. I can pick up the phone and ask any one of our players and coaches to do something, and they will respond positively.”

The Louisiana High School Athletic Association (LHSAA) basketball championships were played without stands full of fans earlier this month. As COVID-19 concerns continued to mount, LHSAA released a statement that left the door open to resuming the spring sports seasons on April 14, if at all possible.

There’s no guarantee that will happen. Monica sees baseball and softball taking one of two routes: playoffs could extend into June, or the entire spring could be a wash.

Monica is hopeful that baseball players will participate in American Legion summer ball. As of now, the program is offered to young men up to age 19.

“Seniors can participate if they have not passed the age limit,” Monica said. “I wouldn’t be surprised to see legislation about that for those kids that are turning 19.”

Softball players from the River Region typically participate in the Metro Softball League over the summer.

However, baseball and softball players are not the only athletes impacted by COVID-19 closures. Tennis, track and field and golf are only a few examples of programs put on hold.

“We’ve never seen something like this before,” Monica said. “Everybody has made some sacrifices, and hopefully we will get through this together. I’m impressed with how the community responds. They’ll step forward and do the right way. All in all, it’s allowed us to get back to the basics, get back to our family and realize He is still in control.”

Spring football is near the bottom of Monica’s concerns, since it would only last a maximum of 10 days. Since dual athletes on the baseball team have been so successful, it’s been closer to eight days in recent years.

Monica is hopeful he will have a chance to see the upcoming talent for the fall and make up for lost time during the summer 7-on-7 football league.

“Everybody is in the same boat. No body has an advantage on you because we’re all starting from square one,” Monica said. “It’s important that we all adhere to the rules and what our officials are trying to tell us.”

He’s more worried about athletes’ ability to work out. With school weight rooms closed, workouts will have to wait a little longer.