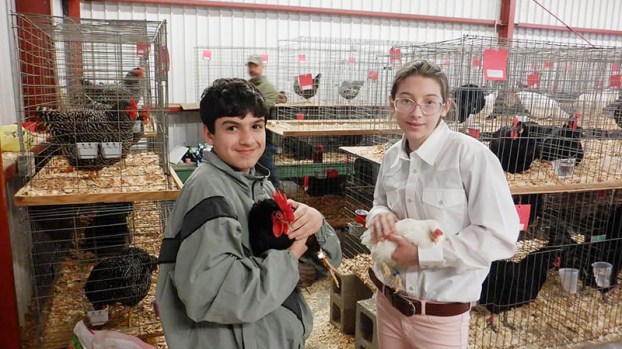 William Carpenter and Rita White hold their hens at a 4-H livestock competition.

RESERVE — William Carpenter, a seventh grader at Riverside Academy, embraced the responsibility of caring for something other than himself as he raised five chickens for the 2019-2020 4-H livestock season.

He was among the 4-H members who represented St. John the Baptist Parish this month in the Southeast District Livestock Show in Covington and the Louisiana State Livestock Show in Gonzales. William walked away from the state show with a third place title for his Rhode Island Red Hen and a seventh place title in showmanship.

Every chicken required meticulous care. According to William, a healthy show chicken requires 20 grams of Purina feed and three ounces of water per day. Overhydrating a chicken can cause it to throw up, leading to an automatic disqualification on stage.

It was also essential to keep the chicken clean by bathing them in soft baby oil or special ivory soap, since harsher soaps would burn the skin. Turning over a chicken is another careful task. Turning them too fast can lead them to get saliva in their tiny lungs and drown.

William wasn’t the only local student to learn the complexities of caring for livestock.

Rita White from St. Peter Catholic School in Reserve came up big during the Southeast District Livestock Show, coming home with first and second place ribbons for two of her exhibition chickens. She also won second place for her Alpine goat and third place for her Nubian goat.

Rita and her mother, Natalie, have bonded through working as a team and sharing responsibilities.

“The benefits are innumerable!” Natalie said. “We have met so many amazing people through the livestock program. Watching my daughter enjoy herself and grow more confident makes it worth the work.”

Caleigh Remondet of Ascension of Our Lord Catholic School placed fifth in showmanship and earned a blue ribbon for her cockerel pin. She also placed 13th out of 134 pullet coops and earned a purple rosette in the process.

In 2019, Caleigh placed sixth in showmanship and 14th overall out of 150 pullets.

Brothers Will and Winn Cupit, both Riverside Academy students, represented St. James Parish’s 4-H Program in the state livestock shows. Instead of chickens, they raised a handful of goats and a cow.

It was younger brother Winn’s second time participating, and he said the experience teaches responsibility. His older brother, Will, competed for the first time this year.

Winn and Will Cupit represented Riverside Academy and St. James Parish 4-H during the livestock season.

“It took a lot of hard work. With it getting so muddy outside, the animals get dirty and you have to make sure to wash them and give them feed,” Will said.

However, he most enjoyed meeting new friends at the livestock competition.

“You meet a whole lot of new people there, and we all help each other out when we need it,” he added. “It don’t matter what parish they’re from.”

William Carpenter of St. John Parish has made new friends from Tangipahoa, St. Tammy, Lincoln and other areas across Louisiana.

“What I enjoy most is the social interaction,” William said. “You make tons of friends over there.”

“This is my first year as a 4-H agent and I am so proud of these three members for their dedication, sportsmanship, and effort during this livestock season,” Terry said.

As a former 4-H student, Terry enjoyed watching students learn the ropes of caring for livestock animals that might be a little smellier and harder to handle than a puppy or a kitten.

The 4-H members used guidebooks to study their chosen animal. They keep a journal of observations and go before a livestock show judge to present what they’ve learned.

The St. John 4-H students will have a chance to practice public speaking again during upcoming demo day presentations, according to Terry. She would like to expand the program with outdoor survival classes that will teach children the basics of hunting and fishing.

“We are still in need of some volunteers to do some projects,” Terry said.

Never too old to follow your dreams: LaPlace woman attains doctorate in theology

Louisiana 811: Make your free digging request at least 2 business days before you dig

Priced out of survival: COVID-19 pandemic worsens conditions for the working poor

St. John has fun with STEM