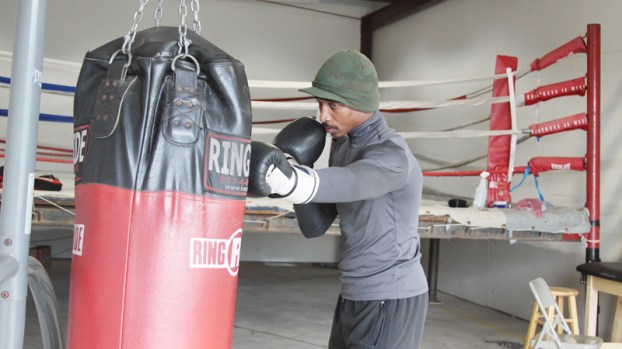 Darrence Williams, owner and operator of Grind Time Boxing, recently relocated the operation to 584 W. 10th Street in Reserve, where athletes and newcomers of all ages receive personal attention.

RESERVE — As young boxers strap on their gloves and head to the practice ring, coach Darrence Williams reminds them the hardest fight does not come from any opponent, but from the twists and turns of life.

Williams, also known as Coach D or “The Running Man” in St. John the Baptist Parish, said boxing is a conduit for teaching discipline, patience and other critical life skills.

After relocating to St. John Parish from California in 2012 to help a family member recover from Hurricane Isaac, Williams laid down roots by opening Grind Time Boxing on Airline Highway in LaPlace.

Some of the Grind Time Boxing students include, above, from left, Toni Leblanc, Courtney Poche, Kim Arcuri, Katie Bailey and Danielle Falgoust.

Boxing became Williams’ passion in 2011 when he decided to follow in the footsteps of his father, a former U.S. Army drill sergeant and boxer.

“My dad was very disciplined; very focused,” Williams said. “He told me some of that was from being in the Army and boxing in the Army, and what you have to do to get prepared for a fight. That translates over to how we train our youth. We teach discipline, honor, respect and how you handle yourself outside of the ring will help you handle yourself inside of the ring.”

Williams became a licensed and sanctioned boxer in California, but plans to return home and go professional gave way when he found a love for working with youth.

Williams also partnered with St. John Public Schools Superintendent Kevin George to host “The Camp of Champions,” teaching fifth through eighth grade boys how to dress for success and safely use social media.

Troubled children are sometimes labeled as “bad” by adults in their lives, and Williams said those same adults are shocked by the difference a few weeks in the boxing ring can inspire.

Boxing is an ideal stress reliever and anger management tool, according to Williams.

“Some kids have all this extra energy, and you’ve got to make assessments and adjustments to channel that in the right direction,” Williams said.

Aside from the mental and emotional benefits of boxing, which includes lessening impact of Alzheimer’s and dementia in the elderly, comes an array of physical benefits from strength to flexibility to coordination.

Grind Time Boxing services are not only open to the youth; according to Williams, who said one physical fitness class member is 82 years young.

Personal training sessions can be scheduled earlier or between classes by request, and the boxing youth program runs primarily from 6:30 to 7:30 p.m. Monday through Friday.

Physical fitness classes are broad in scope and include jumping jacks, squats, step-ups, self-defense and a variety of “interesting exercises with tires,” Williams said.

Coach E.J. Francis directs fitness classes at Grind Time Boxing, and said the environment is unique because it feels less like a gym and more like a family.

“It’s a mixture of everybody there,” Francis said. “There are some people who haven’t done much physical activity, and there are some who are athletes looking for a good place to workout. You might be a 20-year-old and have a 65-year-old working out with you, and everybody gets along. I couldn’t imagine working out anywhere else.”

Francis said coaches work individually with members at every skill level to help meet their goals.

Access to all classes costs $75 per month. For more information, call 985-548-9030 or email grindtimeboxing@gmail.com.