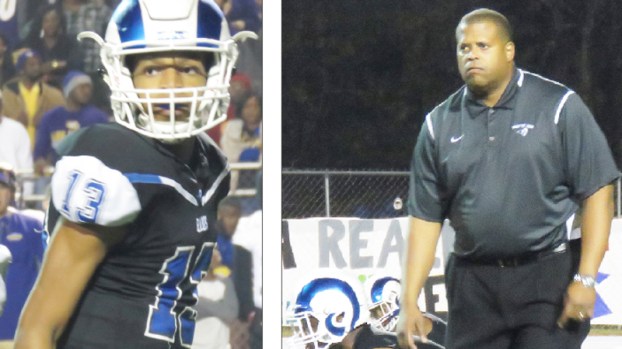 EDGARD — The Rams have won nine straight games, a streak that dates back to a 61-6 Sept. 29 victory over White Castle.

West St. John High’s strong play showed last week in a 34-18 triumph over Logansport, a football team that had not lost since 2015.

Yet, coach Brandon Walters is not willing to say WSJH has reached its full potential…yet.

“I still think we haven’t played our best game,” Walters said Monday morning. “I don’t like to give us too much credit. I want to keep the players wanting to work and wanting to accomplish something.”

Running back Niko Roy, quarterback D’Andre Gaudia and running back Kylan Duhe line up before a snap Friday night in Edgard.

What the Rams (11-2) have left to accomplish is a 1A Louisiana State Championship, and that opportunity presents itself at noon Thursday in the Mercedes-Benz Superdome.

Standing in the way is the formidable Kentwood Kangaroos (13-1), which have not lost since a Week 1-setback, 14-21, at the hands of Loranger.

KHS, the 2015 state champion, advanced to this week’s state final via a convincing 19-7 semifinal victory over Oak Grove.

The Kangaroos run a spread offense designed to get their playmakers in spots to cause damage. And one thing Kentwood has is playmakers, led by wide receiver and LSU commit Trey Palmer, who hauled in two touchdowns last week.

Quarterback Kameron Holloway is also capable of running and passing. He teams with running back Larry Carter to form a dangerous backfield duo.

Kentwood is sure to come out in different offensive formations, with looks including empty backfields, triple receivers to one side and cluster groupings, all in an effort to create space and one-on-one opportunities.

Dontrell Davis, who plays all over the field, looks for the snap while lined up as a wide receiver.

“We definitely have to be prepared for them,” Walters said. “They have a great quarterback that likes to spread the ball around. They kind of motion you away with (Palmer). They do a lot of jet sweeps with him or they send it in motion with him and the quarterback keeps it with power up the middle. Also, (Carter) is a tough kid who is hard to bring down.

“We have our hands full, but we’re used to it. We look forward to the challenge and the opportunity to play in this game.”

West St. John and Kentwood last tangled in September 2016, with the Rams held to 182 yards of total offense during a 15-0 defeat.

“Having gone down to Kentwood the last two years in a row, especially last year, we let them off the hook,” Walters said. “Our guys are playing with a chip on their shoulders and with a purpose. I think our kids are pretty high right now and will definitely be ready. It doesn’t matter who we are facing.”

The Rams enter the state final on a defensive high, having only surrendered two offensive touchdowns last week to previously undefeated Logansport.

West St. John defensive linemen and linebackers took the pressure to the Tigers, forcing LHS into a largely one-dimensional passing attack centered on top target John Stephens, a TCU commit. Stephens was limited to four catches for 35 yards thanks to stellar play from defensive backs Trenton Grow, D’kyri Jackson and the rest of the secondary.

Walters said the noon Thursday start time and Superdome atmosphere shouldn’t present too much of an issue.

“Fortunately, we play on turf and have a really good stadium ourselves,” he said. “We haven’t played on grass the whole year. It will be like going to another venue, just with more lights and we will be inside.”

He said West St. John’s place in the game is a testament to hard work put in throughout the season.

“We’ve had our ups and downs and our battles, but it’s all come together,” Walters said. “We’re just trying to finish out and make sure we do it the right way one more time.”