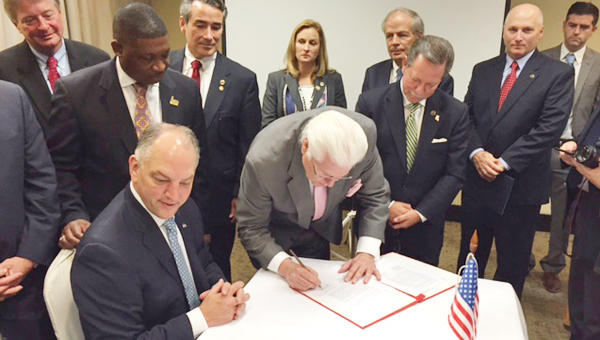 Port of South Louisiana looking to Cuba as trade partner

During July’s fact-finding mission to Cuba, delegates met with Cuban government and trade officials and toured the Port of Mariel. This time around, Edwards was in attendance to sign a ports Memorandum of Understanding with Cuban officials to denote a ceremonial partnership between Louisiana and Cuba to expand trade and commerce.

“We want Louisiana to be first in line to any new opportunities with Cuba, particularly the import, export and foreign direct investment possibilities that could range into the billions of dollars in the coming years,” Edwards said. “For those reasons, we are eager to embark on this trade mission and to place Louisiana in a unique position of leadership with respect to Cuba.”

Aucoin said Port officials are pleased to have been given this opportunity to enter into this memorandum.

“Now we can begin to exchange knowledge and ideas; a merging of the minds, if you will,” he said. “When the embargo is lifted, we will be ready to fully engage in trade and commerce between Louisiana and Cuba.”

The visit solidifies Louisiana as an advocate for free trade with Cuba.

With Louisiana as home to five of the top 15 ports in the United States, Port officials said the state is ready to expand commerce with Cuba, a country that imports 80 percent of its food.

The Port of South Louisiana is the largest grain exporter in the United States with seven grain elevators, some of which have exported 200,000 short tons of grain and flour to Cuba recently under a humanitarian exemption.